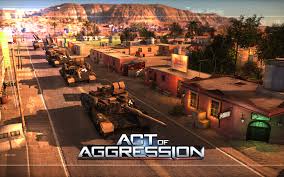 Let’s preface this with: This is not a review. I’m not sure we’re ever going to get into that messy formalized review structure that sites like Polygon and Giant Bomb are dealing with. For two real reasons. One: review scores are messy imperfect things that cause problems. And Two: I don’t expect to have time to play games the proper length needed and this site isn’t just about games. So instead you’re going to get us talking about games and pieces we like or don’t. And sometimes these may sound like reviews.

All of that out of the way, let’s talk about Act of Aggression, Eugen System’s newest Real-Time Strategy, RTS, Game and how it shows a coming problem for the genre. Like so many, Act of Aggression . Eugen System’s, aside from being a Bond villain-worthy name for a company is with a history of RTS under their belt, including one of my personal favorite popcorn RTSs, R.U.S.E. and one my least favorites, the Wargame series. Act of Aggresion is a slight half step between the two series, not remotely as cartoon-like and over the top as R.U.S.E. but not quite the highly detailed war simulation of the Wargame series. With heavy Command & Conquer influences visible, the fact that it is a step back from Wargame — which lacked enough of a tutorial to make it penetrable for me, much less a newcomer to the franchise –is welcomed but the game fails in the same place as Wargame does. They both want the player, the lone single officer with a creative brain (well any brain) to manage complex, evolving military situations down to the micro-level.

Think about it, these games put you in the General’s seat (or at least a Major’s seat) but ask you to do the one thing good officer’s never do. They ask you to micromanage everything, from flying the rescue helicopter to telling a squad to run to the next building for cover when they get flushed. In the real world, it’s tantamount to suicidal and you’re going to get good men and women killed. In Act of Aggression, you have to do it.

This isn’t Act of Aggression’s fault anymore than the lack of peripheral senses in First-Person Shooters is Call of Duty’s fault. They’re inherent limitations of the technology we currently have. But here’s the thing, military from the dawn of antiquity has understood that nothing can get done without good subordinates. The centurions, sergeants and other NCOs of the times could be, and still can be, argued to have far more importance to a military’s success than the generals, majors and other ‘brass’. Sergeants keep the cogs oiled and figure things out.

Act of Aggression has a feature that I absolutely adore, even if its just far too specific for me to worry about in a serious skirmish (which is why I’ve been playing against easy AI). The game lets you take wounded enemy soldiers (its a chance thing) as prisoners who can be used for a steady trickle or burst of rarer resources, depending on the faction of course. Aircraft or vehicles that get shot down/destroyed have a chance of spawning a pilot who is equally capture but will run for home if no enemies are around. Healing injured infantry returns them to the fight, a mostly worthless endeavor given the weight of tanks and artillery that get thrown around. But downed pilots grant you a 200 dollar bonus for being safely returned. More importantly, they’re downed pilots of mine and I’m going to everything I can to pull them out. You get access to helicopters that can carry infantry and the number of times I’ve launched rescue strikes to pull out my downed people borders on silly but I love doing it.

The problem with this mechanic is nothing about it is automated. Sure your pilots will slowly run back to base on their own but that puts them in massive danger. So you order a helio to pull them out and it flys over to pick them up, you go put out three other fires that started while you giving the order and maybe start an attack somewhere else. All this while the helicopter has picked up the pilots and is patiently hovering over the spot, waiting for more orders. Never mind that it should be high-tailing it back to base to get these poor bastards to safety, never mind that enemy anti-air is all over the region. It patiently just sits for you until its shot down or you remember it and order it to race for home. But even then your troubles aren’t over, because while it takes time to fly back home, you’re off doing a dozen other things that a cadre of half competent sergeants could do. One damaged tank siting slightly outside the repair radius while the rest of its squadron is fully repaired? Yeah, managing that is your job. Did a napalm strike just chase a bunch of your infantry occupying a bank out it? Well you’d better be right on top of that cause they’ll just stand outside the building roasting to death (or being shot to death, or blown up or any number of other bad things) until you tell them otherwise. Did they evacuate the building and survive (some of them) the napalm strike? Better tell them to reoccupy the tactically vital building they’d just been inside of because they’ll wait forever. While you’re doing all of this, guess what? That rescue helio that pulled out all the pilots? It’s hovering over base waiting for you to tell it to disembark them and then give them the order to run back into your HQ.

Everything in that last paragraph is a lot of fun, I have some other issues with the urban combat but every individual piece is great. But when you tie them all together and add economy, and combat micromanaging and macro-management of build queues, resources and build zones, it becomes more than one person should ever handle. The military has ranks for a reason. Ranks have jobs and they do their jobs so the ranks above them (or below them) can do their jobs. Games like Civilization strip out the micromanagement and tactical levels as an answer while the Total War series splits them into to separate but integrated pieces, and even its far more limited RTS elements suffer from this requirement that you the players does everything. They’ve answered this with a pause and queue order commands but it disrupts the feeling of being a commanding officer when you have to tell your elite legionnaire century that after they scale the walls they should run the 20 yards further along to engage the enemy guarding the gatehouse. Other games, like R.U.S.E. and Starcraft simplify both until the player can grasp it all.

In the end, I think the RTS genre is going to have push the edges of AI in games if they want to play at being a holistic war simulator instead of war-light like chess and Go. RTS makers need to understand that delegation and specific roles are why/how modern militaries function and not try to throw everything onto the player’s plate. Something as simple as letting two players control the same faction and base, something Starcraft and Halo Wars do, can go a long way to letting all those complicated matters become manageable but the only real solution is to give the players virtual subordinates smarter enough to do their jobs, something we’re not quite too.